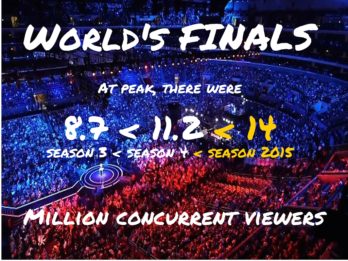 Image courtesy of Jason Reed via the Daily Dot

As the worldwide market for eSports evolves in 2016, it will directly affect the complexion of its live streaming landscape; specifically, the growth of online broadcast platforms used to access the tournaments and individual streams within the eSports ecosystem. Growth within this segment will determine the intensity of rivalry amongst the companies behind these platforms including: Azubu, DingIt, Hitbox, Twitch and YouTube Gaming.

Live streaming and eSports will continue to form a symbiotic relationship, similar to that of traditional sports and TV. An increase in the demand for competitive gaming will result in an increase in supply live streamed content. This will take shape as more game titles focused on engendering a competitive scene; causing an upturn in the number of matches, tournaments and individual streamers broadcasting on the aforementioned platforms. Recently, Newzoo estimated there are 205 million eSports viewers (see figure 1). A number that is poised to grow significantly by 2017.

Since live streaming platforms will continue as the undisputed home of eSports content, continued growth in viewership is a net positive. The world’s largest eSport, League of Legends (LoL), demonstrates this certainty. The LoL World Championship has 127% year over year growth of the maximum concurrent viewers, since 2013 (see figure 2). According to Riot Games, the total number of unique viewers also reached 334 million in 2015, up from 288 million in 2014. The numerical trend here is hard to deny. So while projections may vary, it’s logical to venture that all categories of eSports viewership will swell in years to come. This will drive a larger number of eyes to the live streaming outlets that are home to, not only tournaments but also, the personal streams of various gaming personalities.

While live streaming and competitive gaming have come of age, in harmony, there is a new wave of alternatives which could affect growth patterns; namely, the emergence of eSports on TV and the rise of mobile eSports streaming. The first of which, will be initially defined by the efforts of Turner and its ELEAGUE. Although TV will not dent the entrenched position of live streaming platforms, as the main source of competitive gaming content, it has the potential to seize a wider set of demographics. Specifically, audiences outside the 13 – 24 age group which is a “sweet spot” for online broadcasts. In the likely scenario that other major networks follow in Turner’s footsteps, this could affect the long term growth prospects of live streaming; as older audiences will not be forced to venture online to consume eSports-related content.

The advent of eSports on mobile could also surface as a huge factor in the complexion of the live streaming marketplace. Currently, outside of YouTube Gaming and its Mobile Capture, none of the major live stream platforms offer integrated support for mobile devices. This has created a niche for startups like Kamcord and Mobcrush. However, until recently, it wasn’t entirely clear if the option of streaming from mobile would be a factor for competitive gaming.

Today, judging from the success of titles like Hearthstone and Vainglory, it’s quite evident that eSports can/will find a home away from PCs and consoles. Simpler gameplay for mobile titles, dictated by the limitations of target devices, might unintentionally create a less complex viewing experience that’s friendlier for casual audiences. Additionally, younger age groups will continue to exhibit high mobile usage patterns for activities such as online socialization, entertainment and media consumption. A convergence of factors that could lead to a disruption of the current streaming paradigm.

There are also several elements of the live streaming experience, as it relates to eSports, where innovative changes could affect overall growth. For example, live streamed eSports content is marked by zero-cost accessibility. Unlike traditional sports and premium entertainment content that is locked behind paywalls; competitive gaming is essentially 100% free. However, there is no guarantee this will always be the case. Given the popularity of ad blocking software amongst live stream viewers, subscription models similar to YouTube Red could be on the horizon. It’s not unrealistic to expect some monetary costs to be passed to the viewer over the long term.

“My estimates and personal polling have shown AdBlock numbers in the Twitch community to be around 75 to 80 percent.”

– Starcraft 2 streamer and pro gamer, Steven “Destiny” Bonnell, on the presence of AdBlock

The popularity of celebrity streamers, often former competitive gaming pros, is one of the main draws for live streaming platforms. These notable personalities attract millions of viewers while generating significant income from their viewership numbers. However, this revenue generating model is also ripe for innovation.

One such company targeting this arena is Matcherino. The Seattle, Washington based startup enables viewers to contribute to crowdfund campaigns that fund show matches between top streamers. Should offerings like this grow to scale, it could serve as a model for a new genre of crowdfunded match-ups, this time between entire teams. Providing viewing communities with the option to fund desired content is a huge step in the evolution of live streaming; one that could initiate a new wave of growth and engagement.

Join my FREE newsletter and stay connected to the business side of eSports – http://tinyletter.com/afletcher 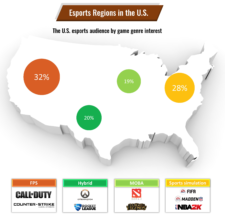 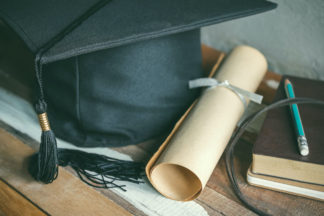